Conceived and implemented only with re-circulating ballscrews, to be applied with service factor up to 100%, Isomove–E precision mechanical linear actuators for high dynamics are available in a broad range of executions. «There are 13 standard sizes, each with different possibilities of screw pitch, which stand out for a maximum nominal force of 350 kN and linear speed up to 1,600 mm/s», states Fabio Seminatore, general manager and CEO of Setec Group.

«The standard IE version, which reaches the internal bore of 100 mm of the extruded aluminium square profile that constitutes the actuator tube, is joined also by two bigger standard sizes: IE125 and IE160, which reach 80 and 120 kN of maximum deliverable nominal force, both in pull and in push, with circular tube». An already very broad range that benefits from Setec’s capability of supporting its customers with the supply of customized products, besides solutions from scratch. Among them, also two particular sizes of actuators, IE 80XL and 160HL. The first integrates a Ø 40 mm screw with 10 mm pitch, with modified bearing package compared to the standard series, which allows having even higher dynamic load capacity than the corresponding 100HL size and about 10-time longer statistical service life compared to 80HL.

Concerning 160HL, the screw remains Ø 80 mm one with 20 mm pitch, they have provided an execution with a bigger number of balls under load for the nut, adopting a suitable bearing package. This allows reaching 120-140 kN of nominal force, but with a much longer statistical lifetime.

«The version Eco (Orthogonal-mounted motor), includes electric actuators, with orthogonal motor as to the actuator’s axis, characterized by transmission with worm-screw/worm wheel gear, provided with both trapezoidal spindle and ball screw spindle. The standard range consists of 6 sizes able to supply a nominal force from 1.7 to 100 kN, with maximum linear speed of 78 mm/s», explains Fabio Seminatore. 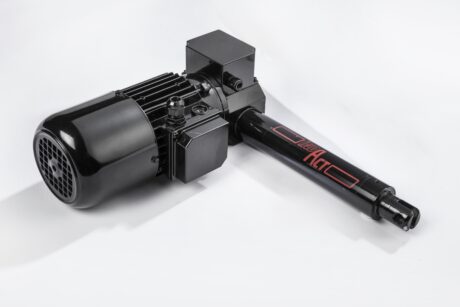 «Ecu (Electric Universal Actuator), represents instead a high-efficiency electric linear actuator with in-line motorization, available with precision planetary gearbox or with direct drive. Due to their design, they address those applications where the time to perform the established stroke must be very short, often handling reduced loads. Ecu standard range consists of 5 sizes with nominal force from 0.25 to 60 kN and maximum linear speed of 466 mm/s», Fabio Seminatore ends.

The modular compact and sound design allows Eco and Ecu electric actuators to suit at best the specific requirements, to meet the most challenging applications, especially where the high-power transmission, with medium or, even, medium-low speed is needed.

Radforce by Setec is a particular hybrid actuator conceived to meet precise requisites in a building automation application. We are speaking of a lifting project on four points, in synchronous manner and under absolute safety, of a cover subjected not only to its own weight but also to variable loads arranged asymmetrically (loads of snow, side wind, heavy rain, hail etc.). Performances to be satisfied with very stiff constraints in terms of available space, as well as of critical environmental conditions, with prescribed duration not less than 20 years, made with resistant materials to the outer environment and salty air, and able to grant the functional integrity for not less than 30 minutes, at a temperature of 120°C.

The staff of Setec technicians, after an accurate study of in-depth design and 3D simulation, also for the sizing of guide elements, has developed a special product, that is to say a hybrid electromechanical actuator, astride an electrical actuator more traditionally meant and a linear unit (then with re-circulating screw). The execution consists of a rod that can be extended up to 900 mm, and it can assure the simultaneous resistance to an axial load up to 30 kN and to a radial load up to 5 kN. The project has then permitted Setec itself to develop functionally analogue hybrid actuators but of inferior size, largely used for instance also in boating application (for handling the cover of the limousine tender, each with 5 kN of axial load and able to withstand up to 2 kN of radial load).