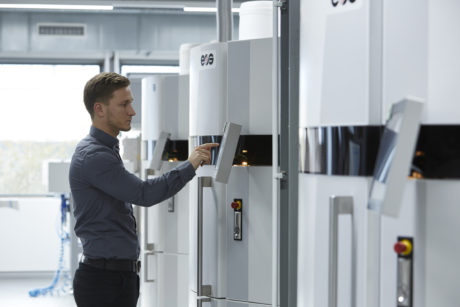 As soon as the first devices appeared for private users, a veritable hype surrounded 3D printing. But there’s a whole lot more behind additive manufacturing than a plaything at the breakfast table, as demonstrated by the Inside 3D Printing International Specialised Conference, to be held in Düsseldorf on 21 and 22 February under the aegis of the Metav 2018. This series of events, one of the sector’s largest with its 10,000 visitors, and scheduled to also be held in cities like Singapore, Sydney, New York and Tokyo during 2018, focuses not only on informational feedback, but primarily on looking into the future. There is keen anticipation to learn what ideas leading companies will be deploying in order to tackle what are still major challenges in terms of research, technological development and integration into the value added chain.

For example, new technologies – in line with the Gartner Hype Cycle – usually pass through five stages of public attention. A technological trigger seizes people’s imagination, and generates exaggerated expectations, which rapidly give way to disillusionment. Only then will realistic assessments come to the fore, enabling the technology concerned to be productively used.

A productive plateau of this kind has been achieved in the 30-year history of technology by rapid prototyping, for example, by layer-by-layer construction of single pieces and sample components from CAD data, and by 3D printing of hearing aids. Applications in the fields of dental technology and automaking have left the disillusionment phase behind and have long since been evolving into successful models. Other processes like 3D printing of consumable materials, surgical implants or bioprinting of human tissue still have a long way to go.

What business models for additive manufacturing might look like is exemplified by Protiq GmbH, a subsidiary of Phoenix Contact GmbH & Co. KG and represented at Inside 3D Printing by Johannes Lohn. Industrial customers upload the data of their 3D models to Protiq’s website, select the material they want, and place a printing order. The models will then be printed within a few days, and dispatched worldwide. “The quality is in some processes so high that intensive reworking is not needed. It suffices to polish the workpieces at certain points, and they can be used directly,” emphasises Stefan de Groot, Additive Manufacturing Technologist at the Metav’s Press Forum in Blomberg. He sees the advantages in significant cost reductions, particularly for small batch sizes, but also in greater functional depth. Close-to-contour cooling and weight reductions based on topological optimisation, for example, are reflected in simpler handling.