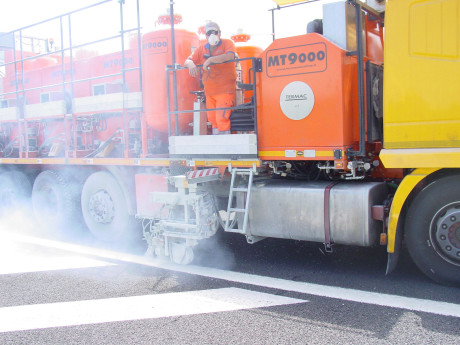 High efficiency, reliability and low maintenance costs: the company with headquarters in the Province of Brescia specialising in developing systems for the construction of horizontal road markings, has chosen Mattei rotary vane compressors.

TerMac Road Marking Solution supplies to Autostrade per l’Italia the largest machine in Europe for the construction of horizontal road markings, equipped with compressors by Ing. Enea Mattei SpA. It is the MT9000 thermoplastic spray lorry-mounted model: with a capacity of 9,000 kg, it is the largest machine in its category in Europe. The MT9000 is equipped with a Mattei M111E rotary vane compressor, characterised by its compact size and particularly suitable for continuous use.

“Our MT9000 are equipped to provide high levels of performance, from both a technical and application point of view – explains Matteo Gilli, the current owner of TerMac – Since 2010 we have supplied the MT series machines to Autostrade per l’Italia because they allow them to reduce downtimes and work non-stop without creating inconveniences as far as road circulation is concerned”. In fact, the MT series is equipped with technical features that accelerate the material heating and preparation phases before the final painting phase: “Our MT9000 machines, with a capacity of 1,800 litres in three tanks, are able to produce about 180 tons of laid material per working day, with considerable savings in terms of costs” adds Gilli.

The laying of road markings requires high levels of reliability and accuracy due to the context in which they are required to operate, as Matteo Gilli explains “Our machines need a compressor that is able to withstand continuous work cycles, often over 12 hours at a time. Furthermore, we can never lose sight of the costs that the laying of horizontal road markings on long sections of motorways entails, nor the inconvenience for travellers. And Mattei technology has always proven itself to be high-performing”

“Thanks to the exclusive rotating vane technology, Mattei compressors are also renowned on the market for their reliability over time and low maintenance costs – adds Flavio Molinari, Italian Sales Manager at Ing. Enea Mattei SpA – A Mattei compressor is capable of operating for about 100,000 hours, without any need for interventions on the moving parts“. 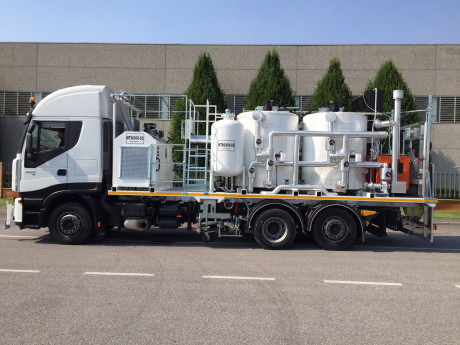 TerMac designed and manufactured also a series of special fittings. For the painting works on the stretch of motorway that connects Rome and L’Aquila, for instance, TerMac developed a mobile removable painting system that is assembled on the vehicle as and when needed: this means that the same vehicle used as a salt spreader in winter, can also be used for painting operations when the mobile system is mounted on the vehicle. “The vast range of equipment that TerMac offers to its customers is backed by the versatility of our compressors, which differ in both dimensions and air capacities provided to meet all possible demands. M80 supplies compressed air at from 1,300 to 1,400 litres/min and is the ideal accessory for TerMac’s smaller machines, which are mainly used for cold painting operations;  M111, with its air capacity of about 3,800 litres/min , on the other hand, it is particularly suitable for installation on TerMac thermoplastic material lorries with considerably higher capacities” concludes Molinari. TerMac has its operating headquarters in the Province of Brescia and is among the major players in developing systems for the construction of horizontal road markings in thermoplastic material (MT series) and in cold sprayed paint (MV series). TerMac, – a company that only selects “Made in Italy” components for its systems – offers diversified solutions with a high degree of customisation for installations on all sizes of self-propelled machines and lorries, in addition to a series of special fittings.

Ing. Enea Mattei SpA designs, manufactures and sells rotary vane compressors on a worldwide scale. This exclusive and distinctive technology has made it one of the authorities in the market segment of compressed air. Every year the company makes 6,500 rotary vane compressors, exporting more than 50% of its production. Mattei is based in Vimodrone, in the province of Milan, and has two plants in Vimodrone and Verdello-Zingonia (Bergamo). It has subsidiaries in France, Germany, Great Britain and the USA, representative offices in Russia and Spain and numerous commercial partners in the rest of the world. In addition, to meet the growing demands of the South-East Asian market, since 2007 a Mattei production and assistance site has been operative in China. Founded in 1919, Mattei is still a family-owned company today.

Made in Italy components for pneumatic automation