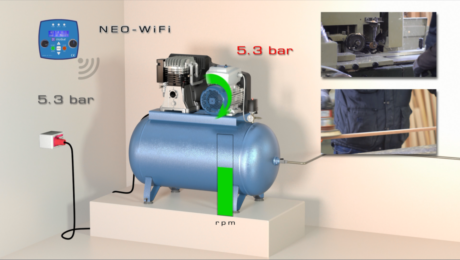 Just limiting our attention to the mode “compressors”, one of the working modes that you can set in the wifi keypad of the patented drive “NEO-WiFi”, we can see lots of advantages. In traditional compressors without NEO-Wifi the flow rate is controlled by a “load/no load” working way. That is a waste of power, that doesn’t leverage the cubic saving that can be generated by the phisycal principle for which the absorbed power changes with the cube of the motor speed which is directly proportional to the needed flow rate

With “NEO-WiFi” the user simply sets the pressure that he wants with 2 arrows and a display, and the motor varies automatically its speed with the flow rate requested to keep that pressure constant.

What are the main differences compared to the standard drives for pressure control?  Why aren’t the normal drives widely used? The most visible differences are:

Solutions for fluid and motion control