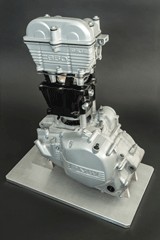 Efforts to produce lighter vehicles necessarily include engine parts, such as the cylinder casing, which could shed up to 20 percent of its weight if it were made of fiber-reinforced plastic rather than aluminum, without added costs. Such injection-molded parts are even suitable for mass production. It’s self-evident that cars must become lighter in order to reduce fuel consumption.
For most car designers this principally means body parts, but the powertrain system, which includes the engine, also accounts for a large proportion of the vehicle’s weight. Until now, carmakers have relied on aluminum to reduce the weight of engine components such as the cylinder block. In the future, car manufacturers will be able to achieve further weight savings by designing cylinder blocks in which certain parts are made of fiber-reinforced plastics. An experimental engine developed by the Fraunhofer project group for new drive systems (NAS), in collaboration with SBHPP, the high-performance plastics business unit of Sumitomo Bakelite Co. Ltd., Japan, demonstrates this principle by using a fiber-reinforced composite material to build a cylinder casing for a one-cylinder research engine.