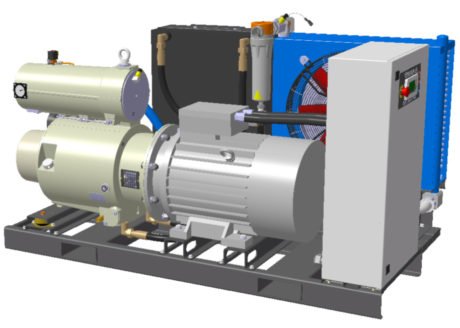 Aluminium foundries are among the industrial contexts where the use of compressors is more subjected to very harsh use conditions. The rotary blade technology of the compressors of the series M135 Mattei, coupled with an intense activity of the company’s R&D division, has given birth to very performing setups also under these conditions. Criticality factors with which it is necessary to cope in foundries are numerous. Starting from temperature, exceeding by about 30° C other productive environments’, thus reaching 90° C on the top of the shed, i.e. where compressors are generally positioned, owing to the heat produced by the aluminium casting process. This is worsened by the presence, in the environment, of a very high quantity of dusts and solid particles, owing to the use of a thick layer of alumina acting as a thermal insulant, which covers casting tanks as a sand bed. Further criticalities are determined, on one hand, by the numerous chemical substances that are emitted into the environment and that, alloyed with oil and the air wetness, are highly corrosive, on the other hand by the presence of a magnetic field that affects the operation of whatever electronic equipment. In this context, where maintenance itself becomes problematic, compressors are expected to grant a continuous non-stop running. Mattei compressors of the series M135, opportunely adapted and sized, over these years have demonstrated great reliability and duration in time, with performances up to the requests. In particular, along the years, Mattei R&D office has been able to develop a significant experience, which has led it to adopt special configurations. To solve the temperature problem, for instance, both the oil circuit and the cooling plant are suitably sized, that is to say radiator and fan, whose blades are made of aluminium to be protected against the dust and sand action. Also electric parts – in particular the copper components of motors and laminations – are over-sized to withstand high temperatures. Moreover, motor casings undergo a special painting to avoid the formation and the stagnation of condensates and stainless steel and aluminium are used, instead of some alloys particularly subjected to corrosion phenomena. Particular attention is finally paid to the filtering process of the input air, owing to the presence of abundant alumina powder in the environment. Mattei uses a double-stage filtering system, first of dynamic type – to capture the heaviest and most contaminated part of the airflow and to suck it – then of physical type, with filters once more over-sized. Finally, the entire control electronics is remoted to a conditioned area.