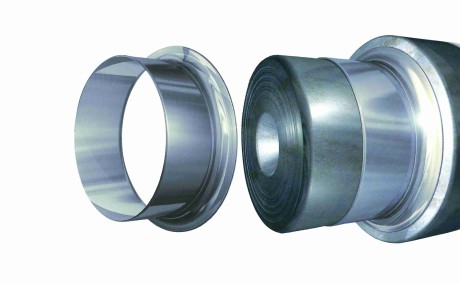 The “shaft saving/repairing” bushes are more and more frequently used to avoid the wear and the scoring of the rotary shaft, the wear of the sealing lip and the power dissipation caused by friction.

The use of seals that perform the sealing function by sliding on the surface of the rotating shaft (fig. 1), has widely diffused to keep on the spot the coolant of rolling bearings and of other gears and for the sealing of fluids in general.

The sealing efficacy depends on the elastic interference between the sealing lip and the shaft surface; the interference, together with the sliding and the unavoidable friction, causes the wear of the shaft surface and of the sealing lip itself, the decay of the sealing effect and the incision (scoring) of the shaft (fig. 2); the shaft incision assumes the characteristics of a groove that, due to the wear progress, may reach such depths compromising the sealing effect. The “shaft saving/repairing” bushes proposed by Pantecnica Service, are more and more frequently used to avoid the wear and the incision of the rotating shaft, the wear of the sealing lip and the power dissipation caused by friction. This application realizes a practical and consequent economic solution in the first assembly stage and in the maintenance phase; in the first phase the bush acts as a protective element of the shaft surface, hindering the formation of slots on the perimeter sliding point; in the second phase, covering the possible slot formed on the shaft and other types of surface damages, we restore the original conditions to allow the optimal use of a new sealing ring. Bushes, having a subtle thickness, do not substantially alter the shaft diameter and, in general, they do not cause the change of the nominal diameter inside the sealing ring. This latter is not, however, an absolute rule, any the rise of the shaft diameter, even if limited, can cause a modest higher friction and, consequently, more heating and more energy dissipation. In such a situation, an adequate examination of the real operating conditions is advisable, also to verify the possibility of protecting the shaft surface, by applying solutions based on sealing elements that perform the sliding on the orthogonal counter-face respect to the rotation axis, without any contact on the rotating shaft.

Bushes of cylindrical-tubular shape, with subtle thickness, an extremity equipped with removable flange which facilitates the installation (fig. 3) and a perimeter pre-notch at its base to simplify its removal, if necessary, once the installation has been accomplished. It can be removed by cutting the flange itself axially in whatever position using a simple cutter, tearing in the pre-notch point.

Resistance to wear: for heavy applications, it can be increased by suitable treatments based on the requirements.

The standard diameter sizes of the “shaft saving/repairing” bushes correspond to the range of the internal diameters of standardized rolling bearings and of the sealing rings dimensionally compliant with DIN 3760 regulations.

In the first assembly use, the size is relatively simple to choose: opting for the bush whose range “min-max shaft diameter” includes the value of the diameter of the shaft to be trigged.

In the maintenance use, it is necessary to carry out three diameter measurements of the shaft in three different positions, in the area to be trigged, and to define the arithmetic mean of the detected dimensions. The bush to be chosen will be the one whose “min-max” diameter range includes the surveyed mean diameter. In that way, the bush will have a sufficiently tightened coupling on the shaft and will not rotate as to it, even without the adhesive. It is seldom necessary to modify the diameter of the shaft and, consequently, of the sealing ring.

Having a subtle thickness, the “shaft saving/repairing” bushes, reproduce all the irregularities of the shaft; therefore, before proceeding to their assembly, it is necessary to execute an accurate cleaning of the shaft, eliminating dirt, any burrs, etc. In the maintenance case, the scoring caused by the previous sealing ring, if deep, must be filled with adequate metal filler; in this case, the bush must be positioned before the filler hardening. In any case, the bush must be applied with removable flange onwards and slowly pushed to the foreseen position, making use of the respective cylindrical tool for assembly (fig. 2), supplied together with the bush itself. If necessary, remove the flange by tearing it along the perimeter pre-notch, after final positioning of the bush. To facilitate the assembly of the spare sealing ring, lubricate the external bush surface, paying carefully attention that the lubricant is compatible with the ring elastomer. The possible disassembly can be carried out in three different ways:

The use of the bushes at issue offers several advantages, like for instance:

Analysis of friction in pneumatic systems