The worm gearboxes with 50 mm center distance have always been among the key products of Varvel SpA in Crespellano, (Bologna, Italy) enterprise specialized in designing speed reducers and variators since 1955.

To make them even more competitive on the global market and in view to a continuous improvement of the made-in-Varvel products, the Bologna based company presents a new model of the gearbox SRS050 with one of the two side covers of the gearbox integral with the housing, bolted in the previous version, thus bringing the gearbox SRS to the same configuration already made in the gearbox SRT. 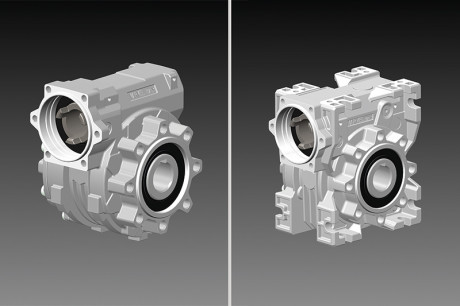 A crucial improvement to increase performances because with one of the two side covers built-in and cast, has brought great benefits in torsional rigidity of the housing and consequently in the customer application mounting.

To facilitate modularity and to expand at the same time the applications, the side cover threaded holes are also increased from 4 to 8 so the customer is able to fix the gearbox in positions rotated by 45°, and not 90° as previously and also to use a greater number of fixing screws always to benefit the mounting stiffness to the machine frame.

An evolution that covers all the accessories bolted on the side of the housing, allowing new configurations. This innovation will also fully eliminate any possible leakage of lubricant between the gearbox housing and the integral cover.

To unify the entire Varvel range, such modifications have also been made on the “universal” gearbox SRT050, allowing this way a choice between two versions with same mounting options.

Redesign has also affected the side that cannot be obviously integral but bolted for mounting reasons, which is strengthened by doubling the fixing screws to the housing from 4 to 8 with same screw thread and depth.

All the remarks on gearbox mounting by 45° and fixing screw doubling are also valid for the accessories.

Also the gearbox heart – the wormshaft/wormwheel gearing – has benefited from innovative updates thanks to housing thickening in some areas and a better balanced wormshaft axis to a longer bearing life by replacing the front bearing from a narrow series 61900 to a standard series 6000, which increased the bearing lifetime by 40%.

As to wormwheel axis, new machining on modified housings and side covers allowed to replace bearings of a narrow series 16000 to standard series 6000 with a load capacity doubling.

Also the elimination of lubricant leakages between the gearbox housing and side cover has been subject of intervention by the Varvel’s R&D department in replacing the previous sealant paste with a new solid laminated graphite gasket which allows to ensure a full tightness with the uniform pressure of the eight screws on the surface.

When a level is different… it shows