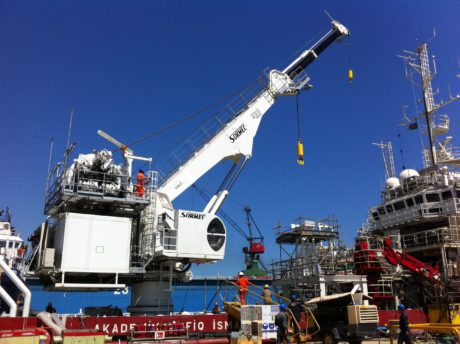 Thanks to the successful partnership with Bosch Rexroth, Sormec realizes cranes for the offshore industry worldwide exported.

From Sicily to the Far East, more precisely from Alcamo to Baku. This is the route that will be covered by the last creation born in Sormec, a company in the province of Trapani that produces cranes for ships, oil rigs, barges and offshore services which is in a constant and dynamic evolution.

The last major project of the company placed in Alcamo is an offshore crane with an offset winch made of 50 tons of rated capacity which will be installed in the next months on a BP ship SCV (Subsea construction vessel) Khankendi stationed in Baku. This is the type of Elbow-Knuckle (EL) M4500/EL crane, able to support operations up to 600 meters deep and equipped with the Sormec active compensation technology AHC, that manages to counteract the wave motion up to force 6.

The M4500/EL is just one of the projects that have been commissioned to Sormec by BP.  These projects represent the highest professional understanding with Bosch Rexroth, the last frontier of the company of Alcamo’s evolution in terms of construction capabilities and design. Among the Sormec commitments for BP, one crane has already been completed.

The M4500/EL crane makes use of the AOPS protection system, that is automatically activated at the overrun of 125% of the maximum load weight, allowing to release the rope, regardless of the operator’s command. In addition the plant is equipped with a manual overloads’ protection system (MOPS) even in the absence of electricity.

For these projects, the collaboration between Sormec and Bosch Rexroth (since 2011) has resulted in the oleodynamic system design and the construction of hydraulic cranes in all its phases, up to the operational phase.

A drive and control system

The heart of the plant is a drive and control system of the main winch, driven by 5 hydraulic motors controlled electronically. For the other drives on the crane, a manifold  has been designed which is able to meet the high performance demands.

In a context such as the offshore, where stability is fundamental to safely and optimally manage the loads to be handled on board of vessels, the collaboration between Sormec and Bosch Rexroth has been of great importance to develop solutions that could guarantee the high requirements of the sector. A partnership that has enabled the company from Alcamo to improve its international competitiveness and Bosch Rexroth to further increase its expertise in the production of marine equipment.

Economic, precise, safe and energy-efficient: the drive and control technology of Bosch Rexroth moves machines and plants of all sizes. Bosch Rexroth provides worldwide integrated technologies for the drive and control of industrial plants – Industrial Applications – and mobile equipment – Mobile Applications, together with technologies related to the renewable energy sector – Renewable Energies – and services. Bosch Rexroth is the only company to operate in these sectors with an integrated supply that can simultaneously satisfy many needs, from design support to the provision of high-quality components. Bosch Rexroth can be the unique point of refernce for its customers for hydraulics, electric drives and controls, linear technology and assembly. With offices in over 80 countries, Bosch Rexroth generated in 2014 a turnover of around 5.6 billion euro.