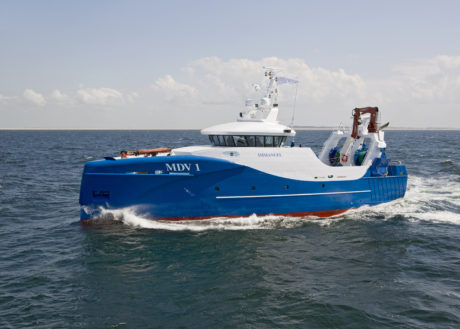 Control Techniques & Leroy-Somer have recently helped complete a landmark fishing industry project by contributing to the construction of a brand new type of marine vessel, the MDV-1 “Immanuel”.

The MDV-1 “Immanuel” is a Dutch-built 30.2 x 8.6m twin-rig fishing vessel devised for the Masterplan Sustainable Fishing Foundation (shortened to ‘MDV’). The boat offers a number of key innovations over traditional craft including, notably, savings of up to 80% in both fuel consumption and emissions (CO2/NOx).

The remit of the MDV, which was established in 2012 to drive innovation in the Dutch fishing sector, is to seek efficiency improvements in every area, including the propulsion system, which on the MDV-1 “Immanuel” is diesel-electric with a variable-speed generator and DC-bus.

This design presents the opportunity to run the generator extremely efficiently, at speeds ranging from 800 to 1,200 rpm, and means the boat can be equipped with two generators (one running) instead of three in the case of AC (where normally two would be in operation). The larger generator (500 kW) is used during transit and fishing, while the smaller one (117kW) is mainly an emergency generator, capable of bringing the boat back to shore at a lower speed.

The system benefits from the use of a 400 kW water-cooled permanent magnet motor (120 rpm) for the main propeller in place of a conventional diesel engine. Along with higher efficiency, further benefits include its small size, with no need for an in-line gearbox with transmission.

Moreover, the fact that impact loads can be absorbed electrically by the engine controller makes the generator more stable and energy-efficient, with less engine noise, less vibration and virtually no need for maintenance.

Four Control Techniques Unidrive M variable speed drives work in tandem with the propulsion engine, with another such unit deployed for the drive of the rotary transformer, along with others for the hydraulic pump, flushing pump, engine room ventilation, fish hold cooling system, and two for the pulse fishing windlasses. The windlasses have to pay an electric cable in and out with a stable tensile force (without breaking), but with a variable swell.

Further products supplied include a Leroy-Somer motor/generator transformer for the on-board electrical system, a brake resistor for the power generation system, rectifier units for the common DC bus, a 12-pulse transformer suitable for variable frequencies, and Leroy-Somer main and auxiliary generators.

Besides the drive components, Control Techniques & Leroy-Somer also took care of the engineering, documentation, testing, set-up, training and drives operating software – not just for control from the PLC, but the application software for managing the frequency controllers of the propulsion engine and rotary transformer.

In order to reduce harmonic current distortion, engineers also advised the use of an electrical system in which a 12-pulse isolating transformer was employed. Switching controllers and generators guarantees a broad-based redundant system without any on-board electrical system interference compromising the instrumentation.

Construction ran to plan and the MDV1 was launched on time. Furthermore, after eight months of fishing the figures look good – the vessel is designed for the efficient fishing of both plaice and sole with a capacity to carry 850 boxes. Importantly, the systems that control and monitor energy consumption are doing their job so well that the MDV 1 can make money even when the price of oil is high.