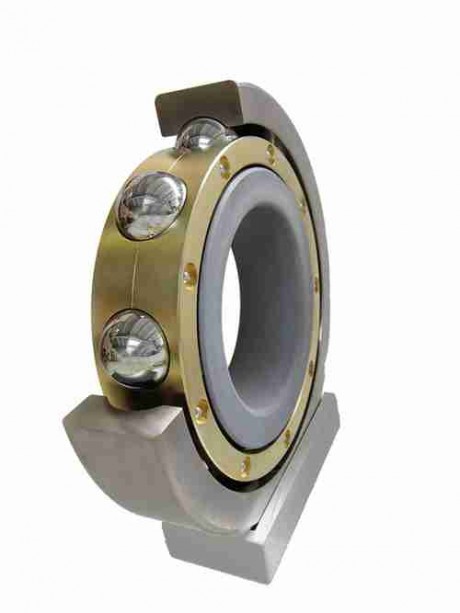 Under adverse operating conditions, bearings used in electrical machines can be damaged by the passage of electrical currents. Electrical discharges occur in the contact zone between the rolling elements and the inner or outer ring raceway. This causes localised melting of the surfaces, which in turn leads to cratering, transfer of material and localised damage to the microstructure as the material is exposed to thermal stress. At least a very thin layer of the eroded surface undergoes a second hardening process and becomes extremely hard and susceptible to cracking. This process is referred to as electrocorrosion. It also renders the lubricant unusable. The base oil and the additives contained in the lubricant are oxidised, resulting in a typical black discoloration of the lubricant. This premature aging permanently impairs the lubricant’s ability to keep the metal surfaces apart. The damage to the functional surfaces of the bearing and the loss of lubricating effect result in a rapid deterioration in the functional capability of the bearing.

Possible causes of undesirable passage of electrical current through bearings

The main reasons for current discharge are known. Asymmetries in the magnetic flux of an electrical machine give rise to a low-frequency voltage between the shaft and the housing, which can result in a flow of current through the rolling bearings. Such a passage of current can also result from the use of unshielded asymmetrical electric cables if the earth connection of the machine is ineffective. Another cause may be the use of frequency converters: the operating principle of frequency converters is based on pulse width modulation (PWM) and generates high-frequency common mode voltage, which can result in a passage of current through the rolling bearings. Lastly, electrostatic charging of the shaft and housing followed by discharge through the rolling bearings is also a possible cause.

Typical signs of electrical corrosion include grey, tarnished tracks in the raceways and on the rolling element surfaces. Melt craters (Fig. 1) or fluting are also discernible mainly on the raceway surfaces. Damage due to current discharge usually manifests itself in increased running noise.

In order to prevent damage of this kind, it is advisable to insulate the bearing seat in the housing or on the shaft. However, this entails changes to the design of the surrounding parts.

A simple, economical solution in this case is to use electrically insulated rolling bearings, as they can replace the uninsulated types without change to the overall design.

Electrically insulated bearings from NKE, designated with the suffix SQ77, are provided with an oxide ceramic insulation layer. These bearings offer exactly the same outer dimensions and technical characteristics as the corresponding uninsulated types.

The most important advantages of these bearings are higher operating reliability, which is assured by optimal protection against electrical corrosion. Electrically insulated bearings are less expensive than applying insulation to housings or shafts for example. They are interchangeable with conventional bearings because they have the same key dimensions and technical characteristics. They also offer a reduced risk of damage and thus also longer operating life than conventional bearings when used in electrical machines. When electrically insulated bearings are handled properly, there is no risk of damage to the coating.

The main range of electrically insulated bearings consists of cylindrical roller bearings and deep groove ball bearings. However, all other bearing types can also be insulated in this way. Application areas include traction motors of railway vehicles, electric motors and generators, particularly in conjunction with fast-switching frequency converters.

For the electrically insulated bearings from NKE, the insulation coating is applied by plasma-spraying, either to the outer ring (SQ77 – Fig. 2a) or to the inner ring (SQ77E – Fig. 2b). In plasma- spraying, an electric arc is created between two electrodes with an suitable gas supply. The plasma jet serves as a carrier medium for applying the aluminium oxide powder (Al2O3) either to the outer or inner ring at high velocity. In order to obtain optimum protection the oxide layer also covers the side faces of the sprayed rings. In a following process step, the layer is then sealed to prevent any penetration by moisture.

The capacitive nature of the insulated bearing is advantageous in the case of AC voltage. The bearing then behaves in approximately the same way as a parallel circuit consisting of a resistor and a capacitor with a frequency-dependent resistance, called impedance. The impedance determines the magnitude of the alternating current that flows through the bearing for given values of voltage and frequency. Here too, the impedance should be as high as possible in order to reduce the current to a level that is incapable of damaging the bearing.

In order to achieve high impedance values, the resistance of the insulating layer must be high and its capacitance must be low. This can be achieved by making the insulating layer as thick as possible and by reducing the overall insulation surface area. When transferred to the bearings, this means that this layer should preferably be applied to the bore of the inner ring. However, the coating is usually applied to the outer diameter for reasons of cost and due to the constraints of the manufacturing process. In most cases, this still results in more than adequate protection against damage from electrical corrosion. Another important property of the coating is its dielectric strength. The bearings from NKE have a dielectric strength of 1000 V as standard.

Highly innovative made in Italy