A team of researchers, at the University of California, Riverside’s Bourns College of Engineering have developed a versatile, relatively non-toxic, and efficient way to convert raw agricultural and forestry residues and other plant matter, known as lignocellulosic biomass, into biofuels and chemicals. 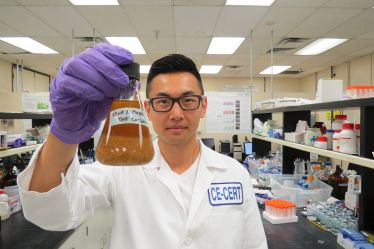 The patent-pending method, called Co-solvent Enhanced Lignocellulosic Fractionation (CELF), brings researchers closer to solving the long elusive goal of producing fuels and chemicals from biomass at high enough yields and low enough costs to become a viable alternative or replacement for petroleum-based fuels and chemicals. The key to the UC Riverside technology is using tetrahydrofuran (THF) as a co-solvent to aid in the breakdown of raw biomass feedstocks to produce valuable primary and secondary fuel precursors at high yields at moderate temperatures. Those fuel precursors can then be converted into ethanol, chemicals or drop-in fuels. Drop-in fuels have similar properties to conventional gasoline, jet, and diesel fuels and can be used without significant changes to vehicles or current transportation infrastructure.