The HS static radial seal developed by Parker-Hannifin exhibits several strong points versus the existing industry standard (the combination of an O-ring and back-up ring) for static sealing at high pressures.  Simplified assembly, higher sealing effect in pulsating pressure conditions and longer service life are just some of the advantages that it offers in comparison with the conventional combined solution. 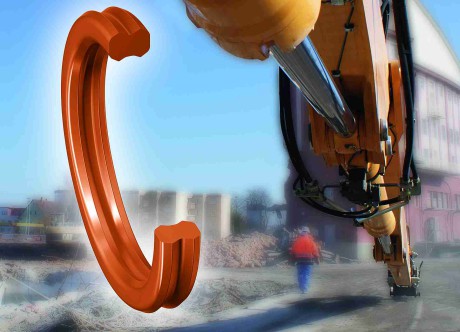 O-ring/back-up ring combination have been considered the industrial standard for static applications at high pressures until now. In the field use, however, they may show some weak points. Standard O-rings, for instance, are often prone to twisting during assembly while back-up rings are not installed in the proper position or are damaged during the installation. Furthermore, that sealing combination may exhibit some limits when exposed to pulsating pressures and dirt.

None of these problems exists with the Parker Ultrathan HS seal. Thanks to the stable symmetric seal geometry and to the use of particularly extrusion-resistant Parker-Prädifa polyurethane compounds, this solution not only simplifies assembly but also enhances sealing performance in pulsating pressure conditions, which significantly extends the seal’s service life. Typical fields of application are hydraulic valves, hydraulic cylinders, machine tools and injection moulding machines, as well as all radial static sealing areas in general.

The HS seal is suitable for all standard O-ring grooves with back-up rings. However, the use of highly extrusion-resistant materials, particularly the P6000 polyurethane compound with a hardness of 94 Shore A, eliminates the need for back-up rings. The elimination of the latter provides additional benefits in the form of simplified assembly.

The advantages of the HS seal result from the configuration of the two sealing areas, which double the protection against leakage compared to a single seal. Furthermore, due to the seal being supported by two sealing edge pairs, exceptional protection against twisting of the seal is achieved, both during installation and in operation, for instance when pulsating pressures occur in combination with breathing assembly components and coaxial defects of the groove.

Benefits that pay off

In view of the widespread use of O-ring/back-up ring combination seals, the advantages of the single HS seal offered by Parker as an alternative to the existing industrial standard pay off for the user in very short time. The easier assembly, for instance, reduces manpower requirements and ensures that the system is running again whenever it is necessary to change a seal. Even more important are anyway factors such as higher operational reliability, resulting from the correct positioning of the seal and elimination of the twisting risk, besides longer service life and higher sealing performance. Due to the reduced risk of leakage, the new solution provides higher safety when it comes to compliance with environmental requisites, an aspect that is particularly relevant for many system operators, especially in the hydraulics field.