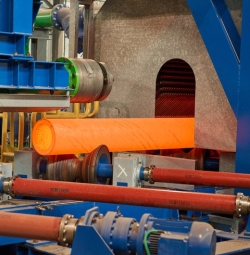 TimkenSteel, Canton, Ohio, announces that it has brought a new $40 million heat treating facility online in Canton. The operation, located at the company’s Gambrinus Steel Plant, will expand its quench-and-temper capacity by 50,000 tons to 500,000 tons per year.

“We’re pleased to bring this newest asset online now that market demand for thermal-treated bars and tubes has increased,” says Tom Moline, executive vice president of commercial operations. “The advanced quench-and-temper facility is the largest of our four thermal-treatment facilities and enables us to meet customer needs faster and at more precise specifications. In addition to automotive applications, this will be especially beneficial for our oil and gas customers’ most demanding applications in down-hole tools and top-of-hole infrastructure.”

TimkenSteel noted that it announced its plan to build the advanced quench-and-temper facility in October 2014. The company said earlier this year that it expected startup in the fourth quarter, a delayed launch that the company attributed to market conditions.

The facility was built by Germany’s SMS Group, which has operations in Ohio and Pennsylvania, with custom modifications made by TimkenSteel’s in-house team of scientists and engineers, the company said. The facility can accommodate 4-inch to 13-inch bars and tubes.