Imagine a battery-powered plane that has 10 engines and can take off like a helicopter and fly efficiently like an aircraft. That is a concept being developed by NASA researchers called Greased Lightning or GL-10. The team, at NASA’s Langley Research Center in Hampton, Virginia, is looking at the idea initially as a potential unmanned aerial vehicle (UAV). 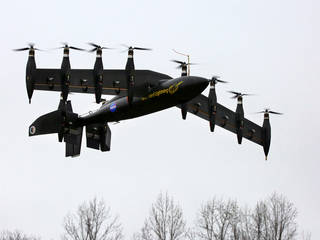 «We have a couple of options that this concept could be good for,» said Bill Fredericks, aerospace engineer. «It could be used for small package delivery or vertical take off and landing, long endurance surveillance for agriculture, mapping and other applications. A scaled up version — much larger than what we are testing now — would make also a great one to four person size personal air vehicle». The GL-10 is currently in the design and testing phase. The initial thought was to develop a 20-foot wingspan (6.1 meters) aircraft powered by hybrid diesel/electric engines, but the team started with smaller versions for testing, built by rapid prototyping.

A configurator for screw jacks and lifting systems