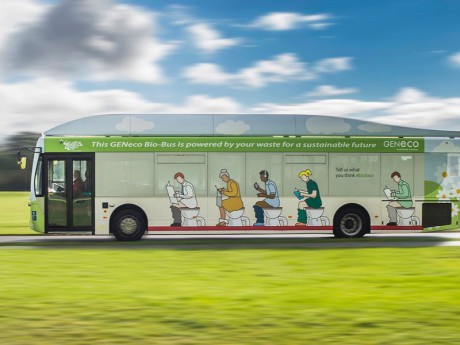 Forty unassuming tourists boarded a bus at the Bristol Airport bound for the historic city of Bath in southwest England. The markings on the bus, however, might have tipped them off that something was different here: One side of the vehicle depicted people dumping food scraps into food-recycling bins (standard waste-disposal in the United Kingdom), while the other side displayed a row of citizens perched atop toilets. The vehicle was the Bio-Bus, the first bus in the U.K. powered by fuel derived from sewage and food waste. Built by biogas plant GENeco, a subsidiary of the local water department, the bus can run for about 186 miles on a single tank of fuel, which is derived from the annual sewage and food waste of five people. According to a report in Fast Company, nixing the standard diesel fuel cuts pollutants, such as benzene and arsenic, by 97 percent. GENeco also claims that the bus puts out 20 to 30 percent less carbon dioxide than a diesel model would. In addition to refueling the Bio-Bus, the GENeco biogas plant pumps enough electricity into the grid to power 8,500 homes.

How to bowl a strike in peace